Fat extraction and breast augmentation are performed in the course of the same surgery on an outpatient basis under local anesthesia. The aftercare effort is manageable, the patients are mobile after the procedure and normally able to work already 1 to 2 days after the surgery.

Typical side effects which are to be expected temporarily after a breast augmentation with stem cell-enriched autologous fat are swellings, bruises, and redness.

Due to surgery the breasts are swollen for a few weeks and feeling hard (see picture in the middle). As soon as the postoperative swelling has subsided the breast looks natural in ever body posture, whether in motion or at rest. Because the additional volume is consisting solely of the body’s own “material”, the enlarged breast also feels absolutely “real”. Injection sites of injection cannulas usually heal without any scarring visible to the naked eye. 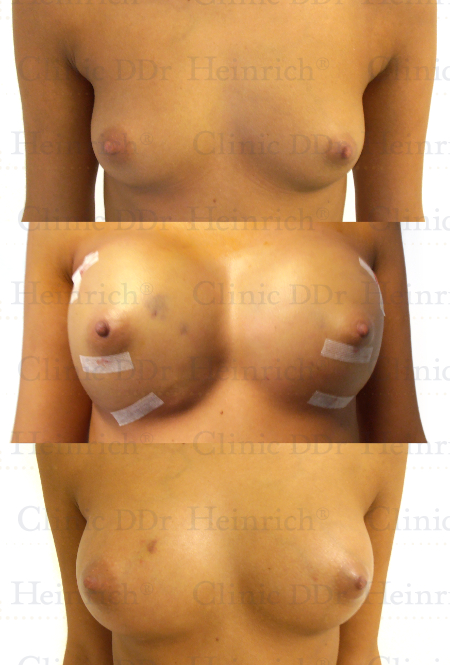 The after photo shows the result actually achieved by the treatment. To protect the anonymity of the depicted person individual physical characteristics (e.g., moles, tattoos) might have been removed.

What is important is that the patient avoids lifting heavy things or squeezing the breast (such as through tight clothes) until the end of healing process. After what time you are allowed to do sports depends on the kind of sport and the individual healing process. Jogging is possible relatively quickly because it does not strain the breast, compared to sports like climbing and tennis, which have to be paused with for several weeks.

Augmentations of about one cup size (see lower picture) are typical. In most women the result are long-lasting, so they can enjoy a naturally augmented breast in the years after the surgery.