These wrinkles are usually a sign of a hormone deficiency. Before you decide to go with hyaluronic acid, talk to a doctor who offers and specializes in hormone therapy. Although there aren’t too many in Austria. DDr. Heinrich is the best that I know of. His clinic is in the 1st District of Vienna, at Landhausgasse 2. You should go to him for a non-binding consultation. — Barbara

I run an office with 20 employees and need lots of energy to get through the daily routine. Although I have always been conscientious about healthy nutrition and have always gotten plenty of exercise, I just felt totally drained.

I did some research online and that’s how I found out about DDr. Heinrich and Hormonal Regeneration. Plus a girlfriend recommended him to me. After an initial consultation, I went with my gut feelings and decided to undergo a six week hormone therapy.

The first two days I was tired, but after that I started gaining more energy. After ca. 3 weeks my skin was noticeably younger and fresher. The tissue is now firmer. In addition the treatment was like a power boost for me, and I felt good all around. My performance capacity has increased dramatically. My energy level is now better after an evening out with little sleep.

I felt that I was in good hands in the Ordination Clinic DDr. Heinrich. There were regular discussions and examinations, DDr. Heinrich took plenty of time to answer all of my questions. Good chemistry and my absolute trust in the value of his experience as a doctor specializing in Hormonal Regeneration characterized our doctor-patient relationship. 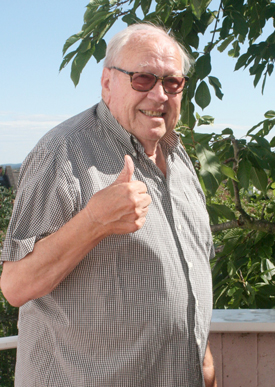 About three and a half years ago, I felt pain in the knees during movement for the first time, which became worse in the following months. Finally, I could only walk on crutches. The restriction in activities of daily life like getting up, shopping, walking, and working in my garden was very burdening for me. In everyday life, I was increasingly dependent on the support of my wife. Every movement caused a lot of pain and I was severely restricted in my mobility.

To keep the pain in check, I had to take painkillers daily. Phsyiotherapy and massage brought unfortunately no improvement. I wanted to avoid artificial knee joints because of the necessary hospital stay and the long rehabilitation. In my search for alternatives, the knee treatment with my own fat stem cells aroused my interest. DDr. Heinrich and his team cared for me very obligingly and professionally before, during, and after the treatment.

In the weeks following treatment, the pain in the knees steadily declined. In everyday life, I now often walk without crutches and I can completely dispense with pain medication! Thanks to the stem cell treatment I can make longer walks in the nature again and am completely free of pain. Gardening is also possible without help. To strengthen my body, I began with muscle training some time ago. I am very satisfied with the result of the stem cell therapy and I am happy to have decided to undergo this treatment.

After years of overwork (full time employment and then self-employment, children, household), I felt exhausted and drained. Too little exercise, eating the wrong foods, sleep disorders, and smoking completed the vicious circle of “feeling bad” and “not taking care of myself.” I was always tired, on edge, and irritable. In the past few years I spent all of my free time resting and sleeping. In spite of that, after I got up I felt completely exhausted by early morning. I withdrew more and more from everything, I hardly enjoyed my work anymore, but it had to be done. Everything was a chore. I saw no way out.

I met DDr. Heinrich at a private event in late October of 2007. After I had a chance to discuss my condition with him, I went online and read up on the hormone therapy that he recommended. Up until then I had avoided doctors of any kind as much as possible, but my suffering and yearning for a better quality of life were so great that I went to him 1 week later for the necessary preliminary examinations at his Ordination Clinic in Vienna.

My hormone therapy started in November of 2007. Just a few days later I felt more relaxed inside; the “dead tired feeling” became less frequent as the weeks went by. Now (March 2008) I feel better and more vital than I have for many years. The sleep disorders have since vanished completely; my skin has improved remarkably. Changing my eating habits isn’t easy for me; I’m still working on that. In spite of the successes I’ve already achieved, my treatment will last a few months longer. I’m grateful to DDr. Heinrich and his team for my newly found zest for life.

I am a passionate basketball player since the age of 13. Even then, basketball was nothing new to me because my father used to play and I often watched his matches. I trained a lot and was able to achieve numerous sporting successes. Amongst others, I was U16 national champion, reached the third place in the U18 in 2012/13, was the U19 vice national champion in 2013/14, played in the U16 national team in 2013 and in the U18 national team in 2014/15. I even received offers for basketball scholarships from several American colleges.

Unfortunately, the hard training quickly left its mark. The pain in my knees started in 2014. In the first year, pain was constantly worsening. During the U18 European Championship it got so painful that I had to take a break from sports for some weeks. After that, I started training again and played in the national league. A few months later the knee pain was so bad that I decided to end the season early. This was especially painful for me.

Through acquaintances, I heard about the possibility of treating joint damages with stem cells from my body’s fat tissue. Conventional treatment methods did not lead to any lasting improvement. I wanted to avoid knee surgery under general anesthesia if possible. That’s why I saw my chance with the stem cells from my own fat! This treatment is performed in Clinic DDr. Heinrich® in local anesthesia. Patients can go back home immediately afterwards.

First, DDr. Heinrich informed me in detail about the treatment method and the course of the procedure. Then I did the necessary preliminary examinations. I was very well-prepared and the procedure went on as expected: In the beginning a small amount of fat was harvested with a small cannula. During the procedure, stem cells were separated from the fat and immediately injected into the area of my knee joints. I was able to leave the clinic by foot.

In the current season I started playing basketball again in the Viennese league. Already at the first training about a week after the treatment the pain had diminished to such an extent that I did not even need a break. I am now completely free of pain and my knees regenerate much faster after the training than before. Recently, I have been training more intensively at my club and I am now working on getting myself in top form again. I am very happy about the result and the care provided by DDr. Heinrich and his team.

It all started back in the fall of 2005. I was listless, had no appetite, and was feeling miserable. That hit me especially hard, because I have always been very active and enjoyed traveling all my life. Just to see what I was still capable of doing, I went on a four week vacation to Australia. That helped, and I felt a whole lot better in Australia. But after my return to Vienna, my condition worsened dramatically. So much so that in February of 2006 I no longer had any desire to live. I couldn’t eat, had no thirst, couldn’t walk very far without having to sit down. I lost 12 kilos in a short time. I didn’t want to go to the doctor, because members of my family have had bad experiences with so-called standard medicine.

In May of 2006 I went on a trip with some friends. I was so worn out that I couldn’t even go for a walk. I then turned to DDr. Heinrich, who proceeded to assess my hormone status. He also insisted that I undergo a thorough examination before starting the therapy. I refused to do that for the reasons I already mentioned. DDr. Heinrich then only agreed to start the treatment after I confirmed to him that I was refusing these examinations of my own volition and that I was aware of the possible consequences.

That was in late May of 2006. By mid-June I had already started to gain weight. I was feeling better and beginning to recover. Every day I took 15–20 tablets, applied creams, and received injections. I was improving steadily. DDr. Heinrich advised me to continue the treatment a while longer, but I don’t want to do that. I want to know what will happen if I cut back on the Hormonal Regeneration now that it’s been six months, and then perhaps even stop it completely. I am now on half-doses and feeling well.

I believe that the bioidentical hormones saved my life. All I can say is that I was suffering greatly from my condition and that I now feel much better. I go swimming regularly, do fitness training, and am even planning to go to Tibet. DDr. Heinrich believes that I will be able to do it. I am now convinced that there is really something to Hormonal Regeneration.

My standard medical tests show the same thing. The only test that I did have before the start of the treatment was a blood test. And the result was terrible. I repeated the test in December and the result was impressive. Any skeptic can see for himself.

The problem that brought me to DDr. Heinrich was obesity. I had stopped playing sports and gained 25 kilos in just a few years. That was somewhat unnerving to me, especially where I was also having trouble with my knees. I started my own research right away, and DDr. Heinrich’s name kept coming up. I decided to schedule a visit to the Ordination Clinic. The doctor seemed very competent and trustworthy and made a good impression on me.

I learned from him that one can lose weight much more easily with the combination of a change in diet and certain hormones. The first thing he did was give me detailed advice and explanations. For example, I was worried about a potential risk of breast cancer. These worries were assuaged.

My goal was to lose a lot of weight, hence I started with a diet and bioidentical hormone therapy. The diet was based on reducing carbohydrate consumption; I ate a lot of vegetables, white meat, fish, and lean red meat. Unfortunately I am not especially good at eating properly. I consider dieting as diminishing my quality of life. Nevertheless I stuck with it for three weeks, and managed to lose around seven kilos. Unfortunately I didn’t stick to the diet that well after that, but still managed to lose another three kilos. That now makes ten kilos in three months. But I am still taking my bioidentical hormones and various active principles.

The main thing is that I feel very good overall with this treatment. I can concentrate better than before and I feel very alert. The only side effects were sleep disorders at the beginning of the therapy. I told DDr. Heinrich about that, he made slight adjustments to the therapy and the problem went away.

At this point I would like to continue the therapy another month and adhere strictly to the diet again. Obviously the ideal thing would be for me to change my eating habits for good and get more exercise.